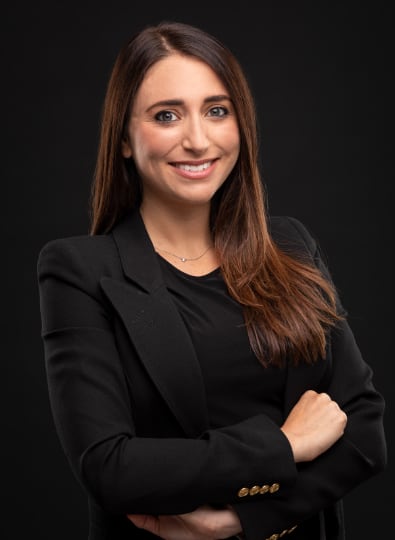 Ms. Schindler is a personal injury attorney who represents individuals harmed by medical malpractice, dangerous products, motor vehicle collisions, and general negligence in Pennsylvania and New Jersey. She approaches every case with careful attention to detail and is dedicated to achieving the best results for her clients.

Prior to joining Kolsby Gordon Robin & Shore in 2019, she spent several years working as an attorney law clerk in the Philadelphia Courts, and went on to represent hundreds of injured plaintiffs in high-stakes cases across the United States. She now focuses on fighting for those injured in the Pennsylvania / New Jersey region which she and her family have called home for generations. Her unique experience litigating against some of America’s largest corporations and law firms, in complex matters ranging from dangerous and defective product cases, to employment class actions, and antitrust litigation, gives her an edge as an advocate for individuals and families.

Ms. Schindler first took interest in plaintiff’s personal injury practice as a law student, spending several semesters working on product liability, medical malpractice, and other catastrophic injury matters at another Philadelphia law firm. She was a standout student in her trial advocacy and evidence courses at Villanova Law School.

As her first attorney position, she spent two years as a law clerk for the Honorable Arnold L. New in the Philadelphia Court of Common Pleas Mass Tort Program. There, she assisted in adjudicating thousands of personal injury claims brought against pharmaceutical and medical device manufacturers and sellers of asbestos-containing products.

Ms. Schindler then spent four years with the Pennsylvania-based law firm of Pogust Braslow & Millrood, LLC, where she represented plaintiffs across the country in a variety of complex matters, with an emphasis on claims against pharmaceutical and medical device manufacturers. She was involved in achieving millions of dollars in confidential settlements for those harmed by dangerous drugs and medical devices such as orthopaedic implants. In 2018, she worked with an affiliated law firm on a nationwide antitrust litigation against the country’s two leading providers of car dealership management systems, which resulted in a $30 million partial settlement. She also played a key role in litigating class action lawsuits against employers under the Fair Labor Standards Act.

In 2019, Ms. Schindler joined the team at Kolsby Gordon Robin & Shore to focus on representing injured individuals and their families, with an emphasis on complex cases such as product liability, medical malpractice, and other matters involving severe injuries. In her short time at the firm thus far, she has achieved several confidential six-figure settlements for her clients. She is also currently involved in litigating many of the firms’ most complex medical malpractice and catastrophic injury cases.