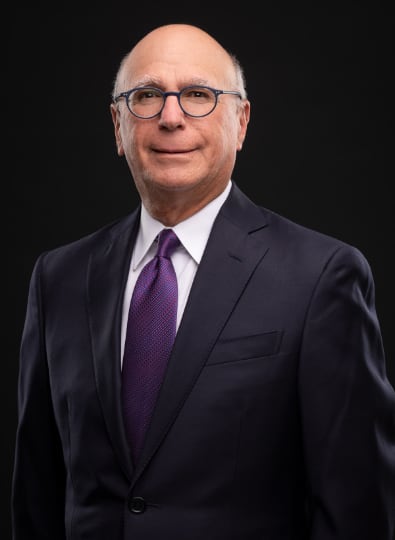 Mitchell Shore is a partner at Kolsby Gordon, where he concentrates his practice on representing individuals and their families in complex medical malpractice cases, including those involving anesthesia complications, obstetric and gynecologic complications, surgical complications, delay in diagnosis of cancer, and inappropriate pharmacy practices. Mr. Shore also represented families who have sustained injuries and losses involved in tractor-trailer, auto and aviation accidents in claims against airplane manufacturers and manufacturers of aviation parts and engines. Mr. Shore has also represented families in claims against property owners and security companies resulting in serious injuries and death.

Throughout his career, Mr. Shore has been involved with various medical malpractice cases, including complex tort claims against pharmaceutical manufacturers in national drug litigation concerning Diethylstilbestrol (DES), Selacryn, Baycol, PPA, and Phen Fen. He has also represented those hurt by drug product devices including the Dalkon Shield, gastric bubbles, and bronchoscopes. In a number of cases, he has worked as local counsel with law firms from across the country, coordinating and litigating the claims of many hundreds of people.

Mr. Shore started at Kolsby Gordon as a messenger while a senior in high school in 1973, and has practiced law with the firm since graduating from law school in 1981.

A dedicated attorney known for balancing tenacity with a deep respect for both his clients and the law, Mr. Shore approaches each of his cases with unsurpassed thoroughness and efficiency.

Mr. Shore has litigated many of Kolsby Gordon’s most significant cases, some of which have had wide-reaching effects on their respective industries.

In a case with significant safety implications, Mr. Shore represented the family of a ten year-old boy who lost both arms after receiving a substantial shock from a Philadelphia electric sub-station. The boy chased a rabbit into the station, unaware of the extreme danger. He came into direct contact with the top of a capacitor—an exceedingly dangerous piece of equipment that converts high voltage electricity to the voltage used in residences and businesses.

At the time of the incident, roughly half of Philadelphia’s capacitors were not covered, which posed serious safety hazards to the surrounding community. As a result of this successful case, all capacitors in Philadelphia are now covered by a chain-link fence, and new safety signs with more graphic descriptions of hazards have been erected.

Mr. Shore has also represented victims of medical malpractice. In a case of hospital negligence, Mr. Shore helped the family of a young man diagnosed with acute lymphocytic leukemia who, after receiving a stem cell transplant, went back for additional treatment years later.

In an error that cost this man his life, the hospital had thrown out the stem cells taken from his first stem cell removal after mistaking them for a patient with the same name, despite having differing social security numbers and birthdays. Mr. Shore and the team of attorneys at Kolsby Gordon helped this family settle for a significant sum from this major Pennsylvania health care institution.

Mr. Shore has also represented the estate of a Chinese national who was attending school at a local university. The young man was living in a gated apartment complex and was suffering from a medical issue and called 911 for assistance. The emergency services arrived at the apartment complex but due to the absence of any personnel present at the security gate, the doors to all entrances to the building being locked and no map of the property posted, the rescue squad was delayed for a significant period of time until they were able to secure entrance to the property and locate the resident. By the time they arrived at the young man’s side, he was unable to be resuscitated. Had they been taken to the young man directly upon arrival, he would be alive.

Following this incident, the apartment complex changed its security practices as well as placing maps and identifying all buildings.