Courting Justice: I’m Mad as Hell and Not Going to Take It

In the 1976 movie Network, William Holden plays a somewhat deranged news anchor that’s angry over how corporate politics and bureaucracy controlled his life. In an on-the-air rant, he urged his viewers to go to their windows and scream at the top of their lungs, “I’m mad as hell and I’m not going to this anymore!”

Recently, a South Florida trial lawyer did the same thing. Well, sort of. The lawyer was sick and tired of how the insurance industry had a stable of doctors in their back pocket who were always willing to testify that an accident victim either wasn’t injured in the accident or that the victim’s injuries pre-dated the accident.

Rather than scream that he was “mad as hell,” he did the next best thing. He took out a half page advertisement in a South Florida newspaper. In it, he put the public on notice that the insurance industry pays millions of dollars to doctors to mislead juries and derail the personal injury cases of their family, friends and neighbors. He urged the public to stop blindly accepting what these doctors have to say on the witness stand and give their fellow citizens the benefit of the doubt that they were injured.

Clearly, this lawyer was mad as hell and wasn’t going to take it anymore.

Although I have no intention of taking a half page ad in a newspaper, and must admit that his rant smacks of “sour grapes,” the reality is that at times the insurance industry doesn’t play fair despite the fact that you have a legitimate claim. Does that surprise you? The New England Patriots have been accused of cheating by deflating footballs. The little league team that won the national championship just had their title taken away because they brought in ringers from outside neighborhoods. They cheated. If little leaguers do it, do you really think the insurance industry doesn’t?

I just got done a case where despite the fact that the decedent underwent a full autopsy that confirmed that the cause of death was due to the defendant’s negligence, the defense hired a doctor, who never examined the body, who was willing to take the witness stand, put his hand on a bible and opine that the decedent died of something totally different and unrelated to the defendant’s negligence.

Welcome to my world.

The Florida lawyer’s ad appears below: 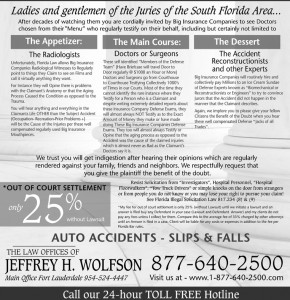